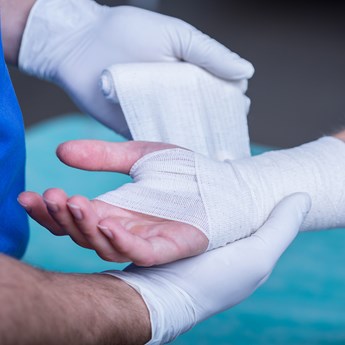 Thanks to the five star services from Unite Legal Services I have now received compensation for this accident, without stress or worry.

Kirsty was involved in an accident during the course of her employment. She works front of house in a restaurant and, on the day of the accident, Kirsty was preparing a panini for a customer. She opened the lid of the sandwich toaster then let go of this in order to place the panini within it. However, instead of staying open as the lid should, it fell onto her, resulting in a burn type injury to her left hand and wrist.

Kirsty, through Unite Legal Services, was contacted by a specialist personal injury solicitor to discuss her case. Due to the specialist knowledge of the solicitor appointed by Unite Legal Services, a settlement was negotiated with the insurance company acting on behalf of her employers. Following negotiations with Kirsty’s solicitors, the insurers accepted liability for Kirsty’s injuries as they had failed to provide suitable work equipment. No court action was required, which meant Kirsty secured her compensation quickly and without the need to attend at court.

Unite Legal Services funded a medical report from a Consultant in Emergency Medicine, which assisted Kirsty’s case by setting out the injuries which she sustained as a result of the accident at work. The medical expert noted Kirsty’s symptoms resolved within eight to 10 weeks. Negotiations commenced between Kirsty’s solicitor and the insurance company until a settlement was agreed in the sum of £3,500 in a full and final settlement. As this case was funded by Unite Legal Services, Kirsty retained 100% of her compensation.

Through Unite Legal Services, Kirsty accessed specialist legal advice from a solicitor ensuring that negotiations relating to her case began in early course. The settlement of £3,500 has ensured that she has been adequately compensated for her accident which could easily have been avoided.

Kirsty said: “Thank you to Unite Legal Services for all of their help. I could not have asked for anything more as I am very happy with the outcome of my case and settlement received.”