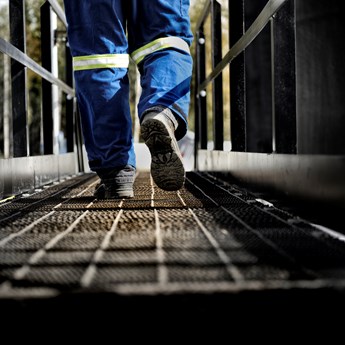 “Thanks to the support of Unite Legal Services I have now received fair compensation and look forward to moving on with my life.”

Paul was involved in an accident during the course of his employment as an offshore medic. He arrived on the Rough 47/3B platform by helicopter and, as he was descending the stairwell, he slipped in an area of the stairwell that didn’t have an anti-slip surface.

Paul, through Unite Legal Services, was contacted by a specialist personal injury solicitor to discuss his case. A claim was lodged with Paul’s employer and liability was accepted by its insurance company but they tried to reduce Paul’s damages by arguing that he was partly to blame for the accident.

Unite Legal Services funded a report from a consultant orthopaedic surgeon. This report confirmed that Paul sustained an injury to his lower back with referred pain to his left leg. The medical report allowed for a three year period of recovery. Paul was also examined by a consultant psychologist in relation to his psychological injuries.

As the insurance company for Paul’s employer attempted to partly blame Paul for the accident, court proceedings were raised in the Court of Session, Edinburgh, on his behalf. The case was due to proceed to proof and a pre-trial meeting was held with Paul’s solicitors and the solicitors acting for his employer, where an offer of £40,000 was put forward. This offer was discussed with Paul and it was rejected. A further offer of £50,000 was put forward to Paul which was accepted.

“Thank you to Unite Legal Services for all of their help. I would have no hesitation in recommending this service to any of my colleagues. I would not have been able to do this without their help and assistance.”