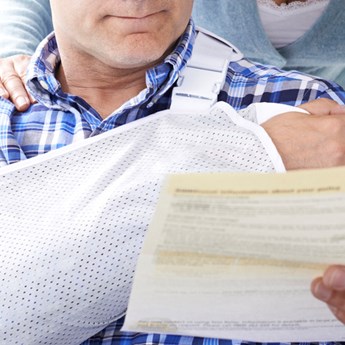 Thanks to the support of Unite Legal Services I have now received fair compensation for this accident and my employer has been forced to change its working practices, making my workplace safer for all of my fellow colleagues moving forward.

Unite member, Scott Barrie, was involved in an accident during the course of his employment as a procurement co-ordinator.

On the day of the accident, Scott was walking from the press hall to the plate room within the factory he worked in. He was carrying large drawings in his hands and as he walked along the designated walkway, he tripped on a pallet which was protruding into his path.

Scott fell and sustained a severe injury to his right arm. He suffered a fracture and dislocation of his right elbow, with associated fractures of the radial head and coronoid process. Scott also developed post traumatic stiffness in his elbow and was informed that he has a 10 - 15 per cent risk of developing arthritis in his elbow.

Due to the fault and negligence of Scott’s employer, he was subjected to an unsafe working area. Scott’s employer was aware that this pallet was protruding onto the designated walkway, but did nothing to prevent it from being a hazard.

As a member of Unite, Scott contacted Unite Legal Services who discussed his case with him. A settlement was negotiated with the insurance company acting on behalf of his employer, meaning that no court action was required. This ensured that Scott was able to secure his compensation quickly and without the need to attend court.

Unite Legal Services funded a medical report from a consultant orthopaedic surgeon which assisted Scott’s case by setting out the injuries he sufferd as a result of the accident at work.

An initial offer of £32,000 was put forward in full and final settlement, which was rejected by Scott. Following this, an offer of £34,668 was put forward which was discussed with Scott who confirmed that he wanted to accept the offer. As this case was funded by Unite Legal Services, Scott retained 100% of his compensation.

Further to this, Scott’s employer changed its working practices, which resulted in the area being changed to avoid risk of further accidents, as well as the pallet being immediately removed.

Through Unite Legal Services, Scott was able to access legal advice ensuring that negotiations relating to his case began in early course. The settlement of £34,668, along with the changes in working practices, allowed Scott to move on with his life.

“Thank you to Unite Legal Services for all of their help. I would have no hesitation in recommending this service.”